Theatre on the Road, a traveling company based in Rosendale, New York, will produce and stage Dracula at the Widow Jane Mine in Rosendale on Friday, September 30th at 7 pm and Saturday, October 1st and Sunday, October 2nd at 3 pm. Written by Hamilton Deane and John L. Balderston, has been described by Newsweek as “as evening of high class fun”.

From the Bram Stoker novel, this is the original Broadway production that premiered in 1927 and was revised in 1997 starring Frank Langella.

Director Frank Marquette describes the play as follows: “Lucy, whose father is in charge of an English asylum, has been attacked by a mysterious illness. Dr. Van Helsing believes Lucy is the victim of a vampire — a certain Count Dracula. Renfield, an inmate, suffers from delusions and is under the spell of the Count. Will he be found and finally laid to rest?”

Frank also offers, “I can’t think of a better marriage of play and location. Who wouldn’t like to experience Dracula live? I’m setting this in the 1920s with period costumes and making full use of the spooky wonders of the Widow Jane Mine.”

2022 Hooley on the Hudson: The Hudson Valley’s Largest Irish Festival 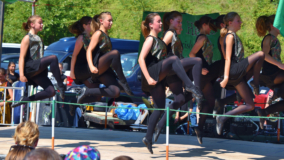 “Living History” presented by Theatre on the Road at the Matthewis...
Scroll to top
×